FRESH FROM THE ORCHARD 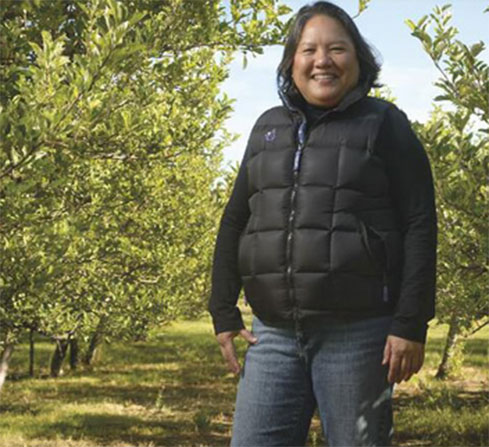 This mantra was rushing through Fran Toves’ mind when she conceptualized her company, Common Cider.

After selling a Salt Lake City-based ice cream company about four years ago, the self-proclaimed foodie and Reno resident was looking for another project to get her hands, and taste buds, on.

Her now 34-year-old son, Jeremy Shea, was an avid hobby home brewer at the time and had entered — and won — Backwash, a craft-brewing competition in Reno.

This created a friendly, but relatively serious, beer rivalry between Shea and Toves. The competition brewing between mother and son pushed them both to enter the Sierra Nevada Homebrew Competition.

Toves, although never having made a cider before, quickly learned the technical nuances of cider making and came in third place for People’s Choice with her Clementine Cardamom. She entered three ciders and all of them placed in the top 10. The unexpected success and interest in her cider helped spur Toves’ newfound love for producing and experimenting to evolve into a business.

ALL ABOUT FLAVOR
Although Common Cider — made in Drytown, Calif., in the Apple Hill area, and headquartered in Sparks, Nev. — was officially released in February 2013, it gained significant momentum by the summer of 2014. In that time, the cider company grew from producing 400 gallons per run to 30,000 gallons per run of the popular alcoholic concoction.

But it’s not just about quantity. Toves creates a high-quality product that’s in high demand. Even professionals are taking notice. For instance, Blood Orange Tangerine Saison took first place at the 2014 California State Fair in the Specialty Cider and Perry (pear cider) division.

“Where the craft comes in is how you layer the flavors in the cider,” Toves says.

Her original concept in creating the cider was to be innovative. She didn’t want to develop ones that were already on the market. In addition to the usual flavors of apple, lemon, hibiscus, and blood orange tangerine, Toves produces several seasonal varieties. Watch for Pumpkin Spice, Pear Cranberry, and Ruby Red Grapefruit infused with rose petals.

“Our ciders are foodie ciders,” she says. “They pair really well with food.”

LOVING LOCAL
Cider means community for Toves, who says creating Common Cider has allowed her to meet more local people in the brewing industry and create strong community connections. She finds that she can support them by sourcing her ingredients locally, which has been a driving factor in producing the cider. All of Common Cider’s raw products come from producers just a few hours away.

The apples are plucked from orchards in the Apple Hill area in California and Hood River, Ore. Even the hibiscus for the popular hibiscus-flavored cider is sourced locally from High Quality Organics in Stead, Nev.

Besides proving to her son she could produce great cider right alongside him, Toves has built Common Cider to allow people to experience fresh cider, without artificial (or natural) coloring, with organic-when-possible, locally sourced ingredients. In short, the 6.5-percent-alcoholic cider consists of 100 percent thoughtful ingredients and flavors.

“I want the ciders and flavors to speak for themselves…” Toves says, “without being doctored up.”

EXTRAS
WHERE TO FIND COMMON CIDER
Find it on draft at various locations in California and Nevada. It also is available at grocery stores throughout the region, including Whole Foods Market and Great Basin Community Food Co-op in Reno.