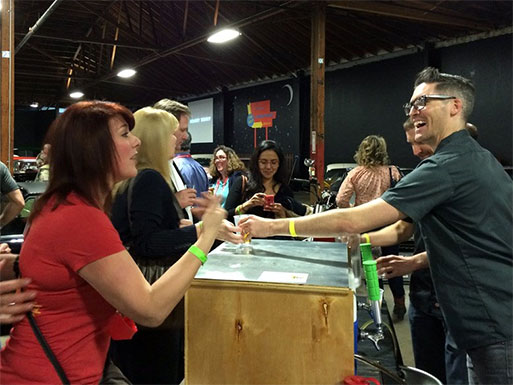 Mike Mraz, of Mraz Brewing Company in Eldorado Hills, describes his tart Saison Je’, “It’s got a little bit of pepper notes from the saison yeast, and it’s got a little fruitiness. It’s got some sourness from the bread and lacto because we age it in some white wine barrels. It’s just got this nice bouquet and balance of flavors.”

“The older craft beers and mass produced beers were sort of our father’s beers,” says Mraz. “We want flavor, we want to enjoy, we want something to talk about.”

Demand is driving a surge in business. Small brew houses are currently opening at the rate of two per week in California.

There are more than 45 breweries in the greater Sacramento region. There were about half that number five years according to the California Craft Brewers Association.

Rochelle Robello, the owner of Cool Beerwerks, says her favorite beer on tap this week is a stinger honey ale.

“It’s got a little bit of a honey finish to it,” says Robello. “It’s crisp clean filtered wheat beer. And, we use locally grown honey from Crazy Coyote farms located in Cool.”

And, if you like sweet flavors, Common Cider in Auburn is featuring a cranberry pear, and a blood orange tangerine cider.

Restaurants and bars all over town are offering events varying from cider and cheese tastings to chocolate and porter pairings.

Hundreds of creative concoctions are on tap during Sac Beer Week. The festival runs through March 8th.